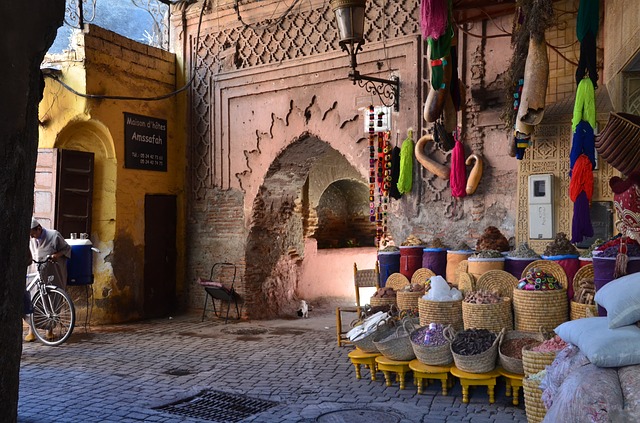 Marrakech is an important economic and cultural center, full of mosques, palaces and gardens. Once an imperial city in Western Morocco, it attracts for the very crowded labyrinthine streets and the succession of souks (markets) that sell fabrics, jewels and typical ceramics of the place. Getting lost in the Moroccan city is one of the most enchanting and suggestive travel experiences that everyone should do at least once in their life but it is better to warn the “navigators” that Google Maps and GPS will not help.

The former capital of Morocco offers an essential sensory experience. The splendor of the sultans, the warm color of the stone, the narrow and intricate streets of the medina, the bright colors of the fabrics on sale at the market and the muezzin that with its song recalls the faithful to prayer are the first attractive elements that the splendid city of Marrakech offers its tourists.

The ideal time for your holidays in Morocco

The best times to visit the city of Marrakech are the spring months, from March to June, but also the autumn months, October and November, this is because the climate is better and the stay more pleasant. However, in spring and autumn the tourist turnout is very high and hotel prices also increase. Particularly popular are the periods of Christmas and New Year but every month of the year is the right time to enjoy an unforgettable holiday in Moroccan lands.

Things to see around Marrakech

The attractions not to be missed in the Moroccan city are many. We have identified five of the most evocative.

What to eat in Marrakech

Moroccan cuisine is characterized by the colors and scents that spicy foods offer. Among the dishes to taste while visiting Marrakesh there are certainly the lamb Tajines; Cous Cous prepared with wheat semolina and accompanied by vegetables, fish or meat; Pastilla, a single dish stuffed with onions and seasoned with cinnamon and then many other foods that will conquer the palate of every guest.

The Riads: the characteristic Berber houses