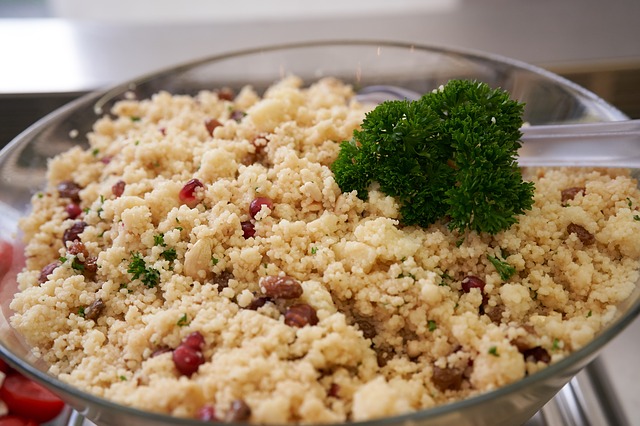 Moroccan couscous. The taste of Marrakech in a dish seven vegetable couscous is one of the simplest but popular dishes in the Moroccan gastronomic tradition. Popular in Morocco and in the rest of the Maghreb, the real recipe has a very long preparation and, often, this simple but tasty food is cooked in a couscous that is a type of double-chambered food steamer. Seven is considered a lucky number in Middle Eastern culture so if the type of vegetables varies from country to country, from family to family, from season to season, in the typical Moroccan dish the number seven remains a constant.

Couscous has Berber origins and for this reason it is a staple of many North African countries. In Morocco they have different types of versions but the typical dish par excellence is, as we anticipated, cous cous with seven vegetables. The simple but long recipe consists of durum wheat granules seasoned with vegetables and meat cooked in a savory and tasty broth. For centuries, the nomadic Berbers used black women to cook cous cous (or couscous), this supports the hypothesis that the food may have subsalarian origins.

A dish that is widespread and appreciated all over the world

Although it is a typical food of the Maghreb, couscous is particularly appreciated in the world and is prepared in many variations. A unique dish that should be served cold with lamb, vegetables and chickpeas, excellent for lunch or dinner and made even richer by spices such as coriander and ginger. The nomadic peoples from which the dish takes its origins, however, served it in the evening and in one large container from which they were served eating with their hands.

How to prepare Couscous

To prepare the couscous, you start by stewing the meat in a pan with oil and chopped onion. The meat, lamb or beef, is seared on all sides and covered with vegetable broth made previously. Subsequently the couscous must cook at least 30 minutes with salt, coriander in grains, ginger and paprika. In the meantime, the vegetables are prepared starting from carrots and zucchini cut lengthwise and added to the meat together with the other vegetables that are chosen for the preparation. Finally, the chickpeas are added. The Cous cous should be placed in a pan to create a thin layer, after a few minutes a little broth is added and left to rest for 3 minutes covered with a film. At this point the vegetables are added to the couscous and served in a dish decorated with spices such as fresh coriander or sultanas.

The taste of eating couscous in Marrakech

Couscous is a dish that can be enjoyed anywhere but acquires a unique flavor when consumed in one of the most beautiful and evocative cities of Morocco such as Marrakech. In the restaurants of the city, when you sit at the table, olives and typical bread (Khobz) are offered to break the hunger while waiting for the chosen dish. The couscous, served with vegetables and legumes, is put on a plate and the portion is abundant enough to consider it as a single dish. The gastronomic specialty attracts the visitor with the colors and scents of the spices that enrich and flavor the dish. Although it remains the best known among the typical dishes of Morocco, there are many other dishes sought after and appreciated by travelers who, in addition to traveling and visiting the cities of the world, choose to experience its customs and appreciate the gastronomic riches and flavors that that specific land can offer.

The Riads: the characteristic Berber houses

Holidays in Marrakech: the city that enchants